History of the company “Nippon Dom” 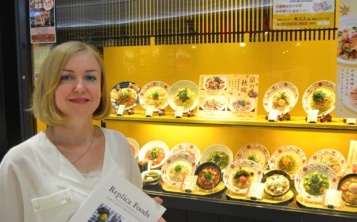 The company «Nippon Dom» is created for you

Hello! Let’s get to know each other.

I am Irina Mironova, a director of company “Nippon Dom”. I have been living in Japan since 2002. My vocation is to help restaurateurs from all over the world to purchase high-quality Japanese silicone fake food models.

I would like to tell you about how amazingly Japanese people are doing their business. About fake dishes as the primary advertising tool for attracting customers to the cafes and restaurants in Japan.  And about how much I like to make the food replicas for you.

The specifics of restaurant business in Japan

When I first came to Japan in 1998, I was surprised by a number of different catering establishments: restaurants, eateries, bars, cafes, fast foods, etc. From a very large to a very small, which could room just a few people. Later on, I read in the guidebook that there are about 80 thousand (!) public caterings only in Tokyo.

Compared with the city where I was born and grew up, it was incredibly much. In my earlier environment, people usually ate at home; restaurants existed for special occasions only.

But for the Japanese, it has been an entirely ordinary thing to have lunch, dinner and even breakfast outside of the home, in a restaurant or a cafe.

Besides, I was surprised that public caterings were combined in small and big groups: from a few cafes and up to several dozens. They were typically located in places of high concentrations of people: on busy streets, shopping malls, entertainment zones, and recreation areas.

And then I asked myself:

How do Japanese restaurants survive in such high competition?

There are catering establishments.On the upper floors of the shopping centers

The Japanese people are amazing. They are practical, intelligent, hardworking, innovative, diligent, and responsible. In the highest competition, they succeed with their business. They manage to have the least possible expenses and the greatest possible profits. Everything is well thought out, calculated, tested and presented most appropriately. The use the most effective methods and tools.

In Japan, you hardly see the restaurant advertising in the media. The primary tool for attracting customers and sales increasing in caterings are displayed fake menu dishes – the complete silicone copies of real meals.

Japanese restaurateurs consider this kind of advertising to be the most effective and rational. Because, unlike traditional methods of promotion in other countries, it is really influencing the decision-making process: a client decides to enter a cafe.

Realistic food replicas on the display window help the restaurateur solve various tasks at a time: get the attention of potential customers, catch their interest, wake up their appetite and push forward the desire to enter the institution. Also, this method is the most rational, because it allows you to save on advertising up to 70% of the budget and up to 100% of the time.

Despite the high competition, each catering establishment in Japan has a constant flow of visitors.

How the company “Nippon Dom” was founded

Regularly watching the magic influence of the fake foods on people, admiring how excellent and realistically they look, I decided to introduce restaurateurs from other countries to the Japanese method of attracting customers. For this reason, I have started the company “Nippon Dom.”

My business dream is that people in all countries like to go to restaurants, and restaurateurs successfully run their prosperous business.

Why is the popular Japanese tradition of decorating showcases with fake dishes hardly known in other countries?

Discussing the design of future models of dishes

Having just a photo of the dish, nobody can make a silicone copy of it. The technology of making fake food assumes one important condition: a real dish. Therefore, Japanese factories take orders only from local restaurateurs.

When I started my business, I did not know that I would not only need to learn to cook exact copies of the dishes from photos. I was also encouraged to learn the basics of building a website and SEO promotion.

I regularly cook dishes from photos and discuss their design with the Japanese masters. I also have a lot of office work: I answer customer questions and compose technical specifications in Japanese.

I love visiting the factory and watching how the craftsmen create surprisingly realistic food replicas. They look so pale and artificial at the beginning, but so real and mouth-watering at the end. Before going to the manufactory, I always have something to eat! Though despite it, when looking at the prepared fake foods, I  feel hunger again and want to taste them!

But my happiest moments are when I pick up your orders from the factory. I am always marveling when looking at it! I take pictures to keep in my memory these perfectly made fake food dishes.

I love the business I am doing and my happy customers! Don’t hesitate to contact me at any time: I am always glad to receive a call or letter from you.

May your business be prosperous and successful!